Ola Rafało, dramatic mezzosoprano, has been called a "Vocal Powerhouse" , and "a Budding baby Cossotto". She has earned critical acclaim in a variety of roles and venues with her “voluptuous”, “contralto like sound” and mesmerizing acting.

“Ola Rafało proved to be a mezzo to watch, with a strong Stride la Vampa” said Anne Midgette, for theWashington Post, Kennedy Center, at the Washington Chorus’ Essential Verdi concert 2014, where Rafało was featured as Azucena, and Amneris. She performed Fenena in Nabucco (Baltimore Lyric Opera, Opera Carolina), “Rafało produced the best singing of the evening, in spite of her role being smaller. "– L. Gazzola of Opera Lively. Naturally continuing in the Verdi repertory, Ola performed Azucena in Il Trovatore with Opera Forza, and Maddalena in Rigoletto with Gulfshore Opera. She was featured in various galas singing Verdi, including: Gulfshore Opera, Opera Tampa, Springfield Symphony, Teatro Curci.

Ola started her career as a mezzo in the title role of La Tragedie de Carmen (2013) with Syracuse Opera, making a big splash in “Opera Today” and leading to subsequent performances of the Bizet version with: New Jersey Verismo Opera, Gulfshore Opera, the Lyric Orchestra, and in highlights with the Pacific Symphony. Ola debuted the role of Charlotte in Werther with Martha Cardona Opera, at the Kaufman Center, with natural ease. She also sang highlights from Samson et Dalilah in various venues. She performed the Mother in Menotti’s Amahl and the Night Visitors, with Orlando Opera. Ola received an award from UNESCO for her performance as Alkmene in the Olympic Torch, (a modern Greek opera by P. Karousos). Ola sang Fricka in Die Walküre, and Suzuki in Madama Butterfly, with the Lyric Orchestra. She created the prima donna role in a new work entitled OPERAWARS, that combines the arts of opera, circus, theatre and other artistic elements, with Opera Del Sol. Other Concert highlights include Carnegie Hall as the Alto soloist in Vivaldi’s Gloria, as well as De Falla’s El Amor Brujo with the Pacific Symphony,which she sang with a “fine dusky quality”-L.A. Times. She was honored to perform the alto role in the American premier of Poniatowski’s Mass, with the Paderewski Symphony, an important work of Polish history.

Last season Ola performed Santuzza in Cavalleria Rusticana with Opera Angelo in New York City, and debuted with Chicago Opera theatre as the Old Gypsy in Aleko. She was accepted to perform a recital for the upcoming Dame Myrna Hess Memorial concert series, and performed a recital for the Wagner Society of America, before leaving for Italy.

Rafało carries dual passports for the U.S. and Poland, and speaks fluent English, Italian, and Polish. Making her also a natural interpreter slavic repertoire, in roles such as Olga in Eugene Onegin, Konchakovna in Prince Igor, Pollina in Queen of Spades, and Jadwiga in Straszny Dwor.

Ola was honored to receive the Maria Callas Prize in 2019, at the 2nd annual Giulio Fregosi Concorso di Lirica in Voghera, as well as the Kitakiushu prize, and the Premio di Teatro Bibiena. She is the 2nd prize winner of the 2017 Altamura-Caruso competition. In 2015 she won Fourth Prize and the Audience choice award from the Young Patronesses of Opera Competition. She has been awarded the Giulietta Simionato career grant from the Inter-city Arts foundation. In 2009, she was awarded the audience prize at the Metropolitan Opera National Council Auditions, Southeast chapter. In 2008, she was awarded Grand Prize of the Elgin Opera competition and First Prize of the Sherrill Milnes Opera Idol competition. Miss Rafało was an apprentice artist at Sarasota Opera, where she received the Leo M.Rogers award, as well as a young artist at Opera Tampa, and Palm Beach Opera.

Ola is a proud member of the Lakeside Artists Guild, a mostly string ensemble which was formed in response to orchestral layoffs in the Chicago area at this team. The guild performs chamber music concerts throughout the midwest region, and online. More information can be found on their website www.Lakesideartistsguild.com

Upcoming she will perform Erbarme Dich from Bach's St.Matthew Passion.

In 2020 Ola was scheduled to make several important debuts, that have since been postponed. Post lock-down engagements that will happen at some point in the near future include: debut with the Israel Philharmonic as Emilia in Verdi’s Otello under Maestro Gianandrea Noseda, (Telaviv), Mamma Lucia in Cavalleria Rusticana at the Teatro Voghera Italy, for the Ultapadum Festival, followed by a concert at the Maria Callas Festival in Sirmione, concerts in Belgium in, with Mythos Opera festival, concert at Teatro Bibiena di Mantova, and her debut with the Chicago Opera Festival singing la Frugola in Il Tabarro. Also upcoming, Ola will sing the Beethoven 9th Symphony with the Evanston Symphony in Illinois. she will create the role of Diskana in a new opera "Second Sight", by Jessie Downs, with Nickel City Opera and the Sotto Voce ensemble in Buffalo, NY. Also this summer, Ola will perform the title role of Carmen with the string ensemble: the Lakeside Artists Guild. She will also debut the role of Brangaene in Tristan und Isolde with the Eugene Symphony. Soon after she will be traveling to Izumo, Japan to sing the role of Santuzza in the world premier of the newly discovered manuscript of an unabridged version of Mascagni's masterpiece: Cavalleria Rusticana.

Ola also teaches voice privately, as well as directs the intro to classical singing at the Lakeside Artists Academy.

Mezzo-soprano Ola Rafalo brought a fine dusky quality to the vocal numbers in the Falla's ballet.
Velvety-toned mezzo-soprano Ola Rafalo revealed promise as Fenena, Nabucco’s daughter.
From her first entrance, Ms. Rafało grasped every musical and histrionic opportunity given to Fenena, allying her firm, plush tones to acting of girlish subtlety. In the trio with Abigaille and Ismaele in Act One, ‘Io t'amava! il regno, il cuore,’ she sang splendidly, phrasing ‘Ah! già t'invoco,… read more
...If one is born with a dramatic instrument and it is developed correctly technically, then a role like that is nothing to fear. For someone like me, repertoire that is too light can be more dangerous...
As a matter of fact she produced the best singing of the evening, in spite of her role being smaller. Ola has a very powerful mezzo-soprano instrument and she uses it with good technique, producing her notes with a great deal of precision. She has a very pleasant timbre an her passagio is smooth with… read more
Mezzo-soprano, Rafalo delivers a truly emotional aria in “Oh dischiuso è il firmament!” a mournful yet hopeful outcry to God for her martyrdom. Despite it being her only aria, Rafalo’s balance of emotions within her vocal clarity is sensational and makes her character stand out despite being… read more
Ola Rafalo proved to be a mezzo to watch, with a strong "Stride la Vampa". Kennedy Center debut Essential Verdi Concert with the Washington Chorus
A thrilling performance of Azucena’s fiery “Stride la vampa” by mezzo-soprano Ola Rafalo, whose imperious manner and dark, sultry chest voice, exploding in a ravishingly focused high G, captured the character’s passionate fury.
There is much to love in the singing here, and Ola Rafalo — singing her first-ever role of Carmen — deserves the lion’s (or should I say tigress’s) share of the credit. Rafalo’s dark and richly hued mezzo soprano during the sultry Habanera established her character immediately as a seductress… read more
In the Habanera Rafalo's execution is both subtle and powerfully seductive drawing Jose and the audience into her tale. The story continues to unfold with "Pres des remparts de Seville" : showcasing Rafalo's ability to at one moment be vulnerable and soft and the next a wild temptress. read more
The torturously tempting portrayal of female lead Carmen (Ola Rafalo) overpowered the theater from the first moment light hits her impeccable beauty. She is a gypsy with serpentine belly dancing that comments on women’s manipulative power over men through sexuality.
Rafalo’s voice has a richness all its own, with a tone that compels the listener to pay close attention to her. Her voice suits Carmen perfectly; it is full, sultry and quite abnormal in the most compelling way. And Rafalo certainly knows how to be sexy.
El Amor Brujo. De Falla. St.Clair and the orchestra captured the dusky sonorities prettily and mezzo-soprano Ola Rafalo sang with a creamy sultriness on high and an apt huskiness down low. Lovely.
mezzo-soprano Ola Rafalo, in the role of Charlotte, cut right through the orchestra's sound with her distinctive and richly textured voice. The interesting texture was very much to our liking. She was outstanding in her moving third act aria  "Va! Laisse couler mes larmes".
"mezzo-soprano Ola Rafalo, who offered a dark voluptuous mezzo that carried well into the hall. Volpe, and Rafalo in particular were vocal powerhouses"
Ola Rafalo, a singer whose raw instrument is sure to warrant her a starry career, at times sounding like a budding baby Cossotto. Though her role is short, it contains some of the most graciously written passages to be found in the score, through which her dark, sultry sound rolled out through the auditorium… read more
"L'affascinante Ola Rafalo, ha ammaliato tutti con la sua potenza scenica e per la sua unica voce, e la sua innata professionalita." La Gazzetta del Mezzogiorno, 2016
"Ola Rafalo performed the role Alcmene, the Mother of Hercules in The Olympic Flame by Panagiotis Karousos with great success and impressed the public. Rafalo’s voice is huge and makes an impact of power. Her aria was well projected to the vast open air Athens Square" Hellenic American Center of the… read more
"The relationship between Amahl and his mom is key to the show, and Tyler Kreusch and Ola Rafalo play off each other with the right amounts of affection and exasperation...." Matthew J. Palm , dec. 18, 2016 Orlando Sentinel
Einsam wachend in der Nacht
Ola Rafalo, mezzo-soprano: Fenena in Verdi's Nabucco
Massenet Werther: Final Duet
Utro утро Рахманинов Rachmaninoff morning contralto song
Ulrica's scene from a masked ball 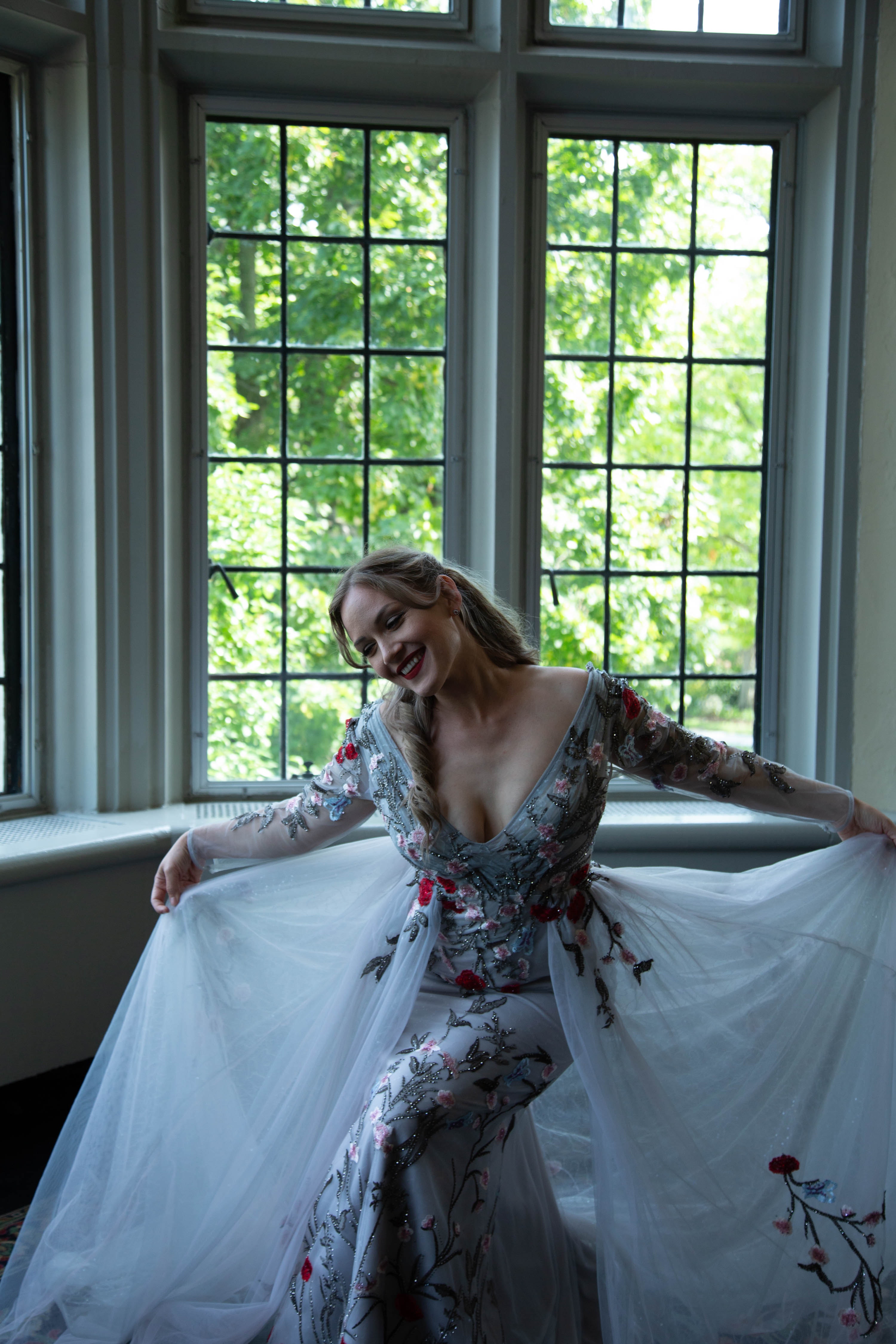 ﻿Thank you so much for visiting!